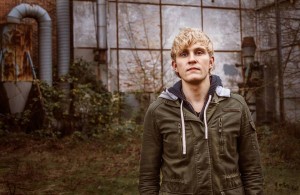 “The Radar Post has an ability to make his audience listen – listen and be present. He is a really talented and skilled songwriter and a great performer – both on tape in a smooth production but also face to face with his audience.” – Bands of Tomorrow

Fame can be a rush. That’s what Danish songwriter and multi-instrumentalist, Esben Svane realized after years as the drummer in several remarkable bands on the Danish music scene. The party progressed, got out of hand and turned into intense unhappiness and Svane made a drastic choice, dropped out of the band and moved back to his parents in the countryside. There, in his childhood home, Svane started from the bottom again, writing and producing the songs that would become his self-titled debut album as The Radar Post – an album he recorded, produced and mixed on his own, as well as he plays most of the instruments himself. A delicate mix of songwriter and indie pop, and that’s why The Radar Post works great both as a solo act and in a band constellation. After a band performance at SPOT Festival in May Polish/German magazine ‚GoodBecauseDanish‘ wrote: „It sounds GOOD. Like, seriously, check out this guy. If you think singer-songwriters are boring or all the same – you clearly haven’t heard this one yet.“

The debut album is a very personal story which is obvious already in the opening song ‘Foreword’ where Svane manages to lay out the past 15 years of his life in less than 3 minutes. About the album the Danish press wrote:

ShoutOutMusic * * * * *
“There are so many feelings dedicated to this album that it totally transmits to the listener. Unusual and unique must be the words.”